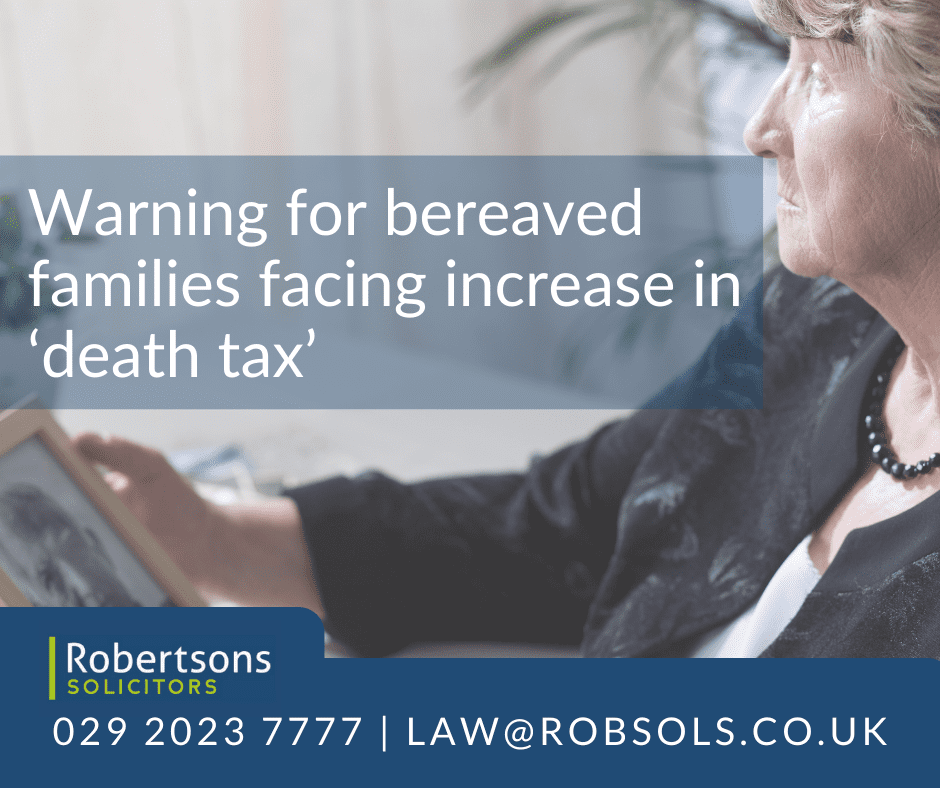 Bereaved families in south Wales could be left thousands of pounds worse off, as well as out of their depth in complex probate cases, due to changes in probate fees and the way the application procedure works, a leading legal firm has warned.

From this week, amendments to the way executors apply for probate in Wales and England come into effect, whilst next April there will see an increase in probate fees for estates worth more than £50,000. The government has said that the new sliding scale of fees means more estates won’t pay anything at all following a death, and that the application process will be simpler and easier to understand. But experts at Cardiff-based Robertsons Solicitors say the increased fees place an unfair burden on grieving families, and that the new online process could put relatives off seeking specialist advice in less straightforward probate cases.

Currently, a flat fee of £155 is paid by anyone using a solicitor to apply to the court for probate, or £215 if they are applying in person. The fee hike was due to come into effect in 2017 – with charges on some estates set to reach £20,000 – but was scrapped due to the snap general election. However, earlier this month it was revealed that the plans are now to go ahead under secondary law, which means they don’t have to be passed by Parliament.

Robertsons’ head of probate, Afonwy Howell-Pryce, said:The changes have been snuck through the back door with no regard to the comments that were made when the changes were first raised in 2017. The work carried out by the probate registries is the same whether the value of an estate is £50,000 or £50 million and therefore the increase in fees is not justifiable. The proposed fees have been thrown into question by The House of Lords who have recently released their comments regarding the proposals.

The online process, although meant to simplify the probate application, may have the opposite effect with lay persons believing the process is more simple then it is or not having a proper understanding of the law which could lead to complications further down the administration process.

Probate is the process of applying to the court for a ‘grant of representation’ following the death of the estate owner, allowing a named executor to administer the estate and fulfill the wishes set out in a will. Executors can be a lay person, such as a friend or relative of the deceased, or a legal representative.

The Ministry of Justice has said the new banding payments would contribute to the costs of running the courts and tribunal service. But the Society of Trust and Estate Practitioners (STEP) has said that 85% of estates would now be liable for the higher fees, based on 2014-5 figures.