When is a Contract not a Contract? Examining the Legal Formalities

Home / News / When is a Contract not a Contract? Examining the Legal Formalities 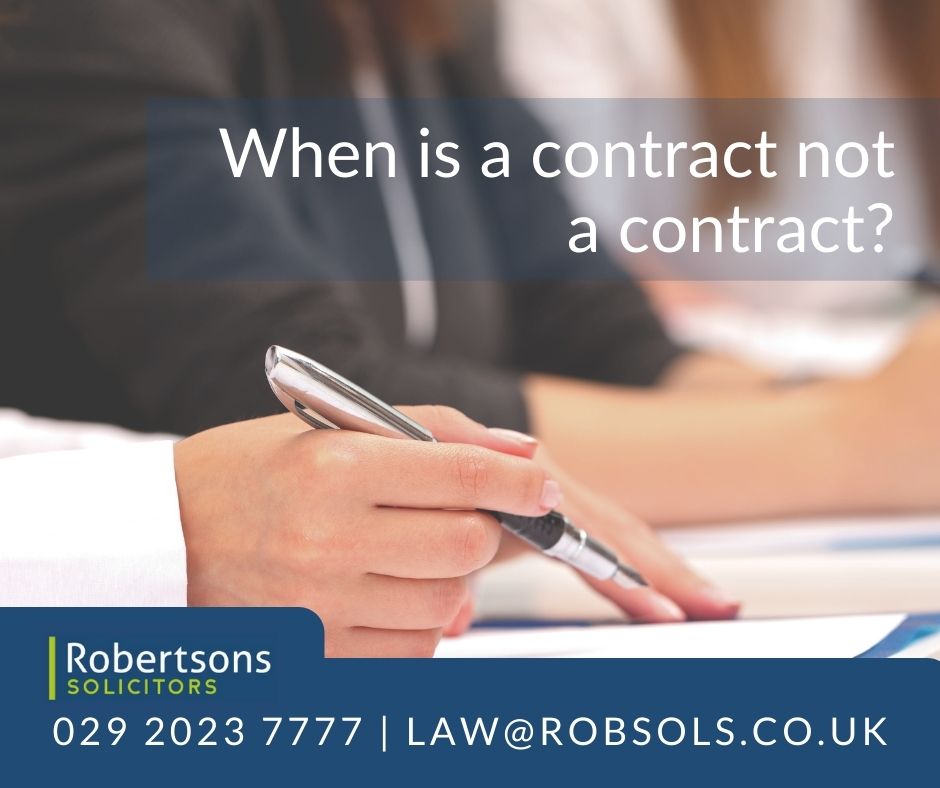 The starting point to any contract matter has to begin with the question as to how and when a contract is made. Sometimes agreements are not signed, or some documents are incomplete which creates an impression that there is no contact.  This article hopes to dispel some of the myths about contract law.

It does not have to be written down

A contract is created when there is an offer and acceptance, and this does not necessarily have to be in writing.  A contract can be formed when the parties agree to the terms of that contract.  It could be for example by way of e-mail or discussions.  The conduct of the parties can also have an impact as to whether or not there is a contract.

A Court will look at the way that the parties conducted themselves and the words that were used and will apply an objective test.  Some contracts are required to be in writing, such as the sale of land, but for the most part, there can be an oral contract, or it can be created simply by way of some written correspondence back and forth.

Ideally, don’t start work until everybody has signed the contract and if work does need to start sooner then try to agree on the important matters first.  Try to make sure that obligations are clearly defined.

The Court of Appeal has previously found that a contract was binding despite the lack of a signature.  The other party had signed, and there was a space for another signature, but it was blank. The Court found that the party had accepted the terms of the agreement.

A very recent case only just decided this year wasMacInnes v Grosswhere, following a discussion over dinner, it was found that a contract had been entered into.  During the dinner, A agreed that he would leave his job and provide services to B.  That night, A emailed B saying that they were delighted to have “agreed on headline terms”.  Nine months later work was undertaken and B continued as though there was no contract.  A successfully sued B on the contract made.

Often there are negotiations back and forth, but nothing transpires into a formal written document.  It is often assumed that there is no binding agreement until all the information is placed within one document.  The Court, however, will look at the words and conduct to determine what the parties intended to be bound by.

To avoid any difficulties, the best practice is to clearly label the correspondence as “subject to contract” this gives an indication that the person writing the correspondence does not intend to create a binding contract with the information given.  However see below where this is not always the case.

Commencement of work without an agreement

If there are matters that are still in correspondence and labelled as “subject to contract” then problems can arise if work commences.

There may be some misperception as to whether a contract has been agreed and upon what terms or indeed whether there is any binding contract at all.

There may be a belief that there is no intention to create a binding agreement but this can be overwritten if a Court considers that the parties’ communications and conduct are such that it should be overridden.   The question will be whether the party intended to be bound by the terms of the negotiations and that will depend upon the facts of the case.  There is much case law in respect of this, but an important case ofRTS Flexible Systemsshows that the moral of the story is to agree on the contract first and start the work later.  Naturally, this is not always possible especially in a commercial setting, and by way of protection, you will need to agree as much as possible.  Maybe you should set out what has been agreed in a short contract or by making them binding within Heads of Terms.  Good examples for elements to incorporate would be the level of work that will be undertaken at that initial stage, what payments are due, how long the contract will last, what are the termination provisions and what will take place if there is no formal agreement put in place after that interim contract.

When the main elements of the agreement are decided, it is often recorded in a document labelled Heads of Terms upon which negotiations will continue.  The Heads of Terms are not intended to be binding although there may be certain aspects of it which are designed to be binding from the outset such as confidentiality or exclusivity.

Again, the Courts can determine what the parties intended to be bound by before the execution of any formal documents.  It is, therefore, important to make it clear in the Heads of Terms or similar documents whether they are intended to be a binding agreement and if so, to what extent.  Again, the words “subject to contract” can be used for anything that is not binding upon any of the parties.

If there are conditions to the agreement such as terms being subject to a shareholder approval, then this can be a conditional agreement rather than no binding agreement at all.

For a contract to be a contract and complete all the legal requirements, then there has to be some consideration provided by both parties.  This means payment or value.  If the document is a Deed, then consideration is not required.  Most commercial contracts are not.  The Court does not mind what the payment or value is, but there has to be something.  For example, if the agreement were £1 for a car then that would be sufficient.

The above clearly shows that contract law is a complex area of law.  If you are looking to draft a contract or have found yourself in a position where someone is enforcing a contract that you don’t agree with, then contact Robertsons Solicitors and speak to one of our experts.